When you want to create a dataset for large-n political science analysis from scratch, it can get muddled fast. Some tips I have found helpful to create clean data ready for panel data analysis.

Click here for PART 2 to create dyad-year and state-year variables with conflict, geographic features and alliance data from Correlates of War and Uppsala datasets.

Packages we will need

The states package by Andreas Beger can provide the skeleton for our panel dataset.

It create a cross-sectional, time-series dataset of independent sovereign countries that stretch back to 1816.

The package includes both the Gleditsch & Ward (G&W) and Correlates of War (COW) lists of independent states.

Click here for a discussion of the difference by Stephen Miller.

With the state_panel function from the states package, we create a data.frame from a start date to an end date, using the following syntax.

The partial argument indicates how we want to deal with states that is independent for only part of the year. We can indicate “any”, “exact”, “first” or “last”.

For this example, I want to create a dataset starting in 1990 and ending in 2020. I put useGW = FALSE because I want to use the COW list of states.

And this is the resulting dataset

So we have our basic data.frame. We can see how many states there have been over the years.

With our dataset with all states, we can add variables for our analysis

We can use the WDI package to download any World Bank indicator.

Click here for more information about this super easy package.

I’ll first add some basic variables, such as population, GDP per capita and infant mortality. We can do this with the WDI() function. The indicator code for population is SP.POP.TOTL so we add that to the indicator argument. (If we wanted only a few countries, we can add a vector of ISO2 code strings to the country argument).

The default variable name for population is the long string, so I’ll quickly change that

I’ll do the same for GDP and infant mortality

Next, I’ll bind all the variables them together with cbind()

This cbind will copy the country and year variables three times so we can delete any replicated variables:

When we download World Bank data, it comes with aggregated data for regions and economic groups. If we only want in our dataset the variables for countries, we have to delete the extra rows that we don’t want. We have two options for this.

The first option is to add the cow codes and then filter out all the rows that do not have a cow code (i.e. all non-countries)

Then we re-organise the variables a bit more nicely in the dataset with select() and keep only the countries with filter() and the !is.na argument that will remove any row with NA values in the cow_code column.

Alternatively, we can merge the World Bank variables with our states df and it can filter out any row that is not a sovereign, independent state.

You can see that df_v2 has 85 more rows that df_v3. So it is up to you which way you want to use, and which countries you want to include each year. The df_v3 contains states that are more likely to be recognised as sovereign. df_v2 contains more territories.

Let’s look at the prevalence of NA values across our dataset.

We can use the plot_missing() function from the states package.

It is good to see a lot of green!

Let’s add some constant variables, such as geographical information. The rnaturalearth package is great for plotting maps. Click here to see how to plot maps with the package.

For this dataset, we just want the various geography group variables to add to our dataset:

We want to take some of the interesting variables from this map object:

This regions_sf is not in a data.frame object, it is a simple features dataset. So we delete the variables that make it an sf object and explicitly coerce it to data.frame

Finally, we add our COW codes like we did above:

Sometimes we cannot avoid hand-coding some of our variables. In this case, we don’t want to drop Serbia because the countrycode function couldn’t add the right code.

So we can check what its COW code is and add it to the dataset directly with the mutate function and an ifelse condition:

If we look at the countries, we can spot a problem. For Cyprus, it was counted twice – due to the control by both Turkish and Greek authorities. We can delete one of the versions because all the other World Bank variables look at Cyprus as one entity so they will be the same across both variables.

Next we merge the new geography variables to our dataset. Note that we only merge by one variable – the COW code – and indicate that we want to merge for every row in the x dataset (i.e. the first dataset in the function). So it will apply to each year row for each country!

So far so good! We have some interesting variables all without having to open a single CSV or DTA file!

Let’s look at the NA values in the data.frame

We with the aggr() function from the VIM package to look at the prevalence of NA values. It’s always good to keep an eye on this and catch badly merged or badly specified datasets!

Click here for PART 2, where we add some Correlates of War data and interesting variables with the peacesciencer package . 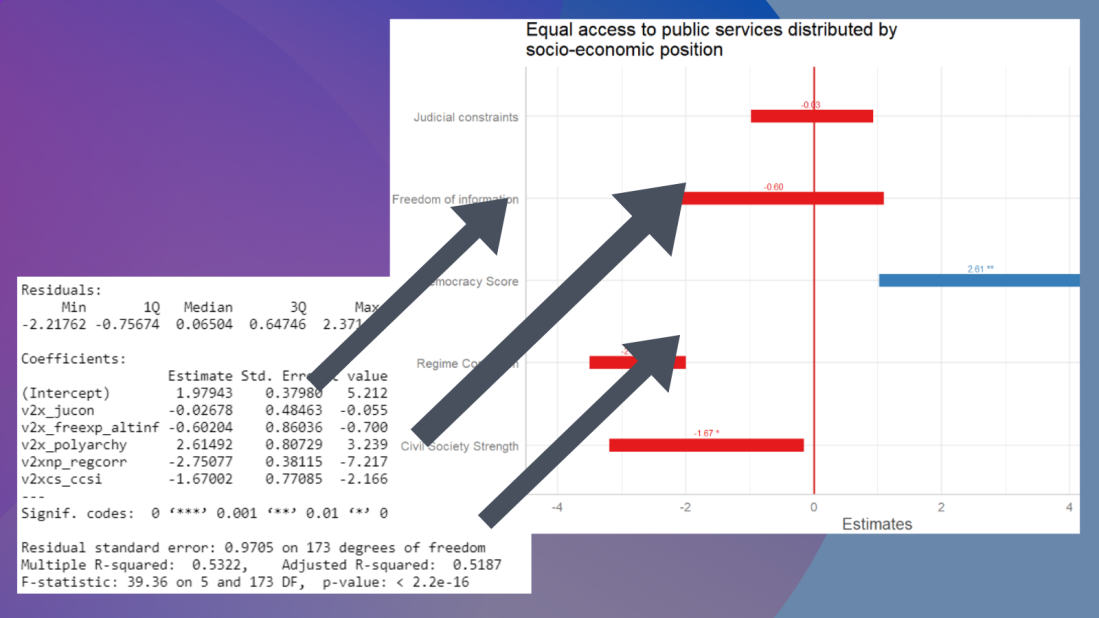 This blog post will look at the plot_model() function from the sjPlot package. This plot can help simply visualise the coefficients in a model.

We can look at variables that are related to citizens’ access to public services.

This dependent variable measures equal access access to basic public services, such as access to security, primary education, clean water, and healthcare and whether they are distributed equally or unequally according to socioeconomic position.

I will throw some variables into the model and see what relationships are statistically significant.

The variables in the model are

So first, we run a simple linear regression model with the lm() function:

We can use knitr package to produce a nice table or the regression coefficients with kable().

I write out the independent variable names in the caption argument

I also choose the four number columns in the col.names argument. These numbers are:

I can choose how many decimals I want for each number columns with the digits argument.

And lastly, to make the table, I can set the type to "html". This way, I can copy and paste it into my blog post directly.

There is no statistically significant relationship between judicial constraint on the executive.

But we can also graphically show the coefficients in a plot with the sjPlot package.

There are many different arguments you can add to change the colors of bars, the size of the font or the thickness of the lines.

So how can we interpret this graph?